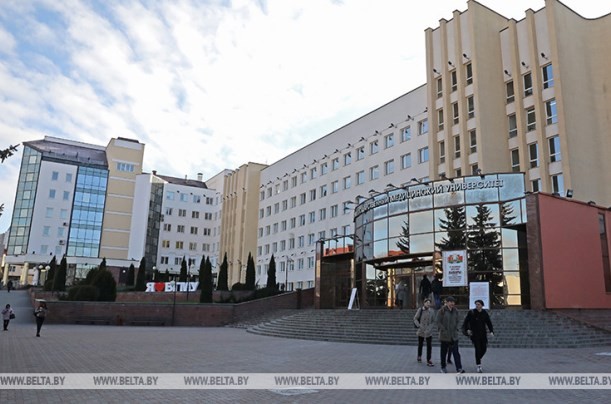 A center for supporting technologies and innovations has been established in the Vitebsk State Medical University. The relevant agreement was signed by the university's Prorector for Science and Research Sergei Sushkov and Director General of the National Center of Intellectual Property Vladimir Ryabovolov on 20 April, BelTA has learned.

The establishment of centers designed to support technologies and innovations in Belarus is supposed to help involve young Belarusians into the innovation process and improve the system of intellectual property protection and commercialization. Chairman of the State Science and Technology Committee Aleksandr Shumilin told reporters: “By the end of the year we intend to open three more centers based on universities in Pinsk, Polotsk, and the Belarusian State University of Informatics and Radioelectronics. Belarusians are a talented nation. We create a lot of innovations, R&D products and it is necessary to properly protect them and commercialize them. It is also important to have access to the world's cutting-edge research, science and technology endeavors. We intend for these centers to cover all the higher education institutions in the country.”

In his words, the operation of the first centers has demonstrated their services are in demand. In 2020 individuals and corporations received over 4,500 consultations regarding the formalization, protection, and transfer of rights to intellectual property assets in the technology and innovation center of the National Center of Intellectual Property alone. “We are expanding this work onto the regions. We've started with the oblast capitals and will move on to the cities where at least 80,000 people live and where there is a university. It works and produces results: while in 2018 we exported nearly $100 million worth of intellectual services, the figure reached $125 million in 2020. But Belarusians should earn so much more with their intellectual labor,” Aleksandr Shumilin added.

The creation of a network of technology and innovation centers is an international project initiated by the World Intellectual Property Organization. It is designed to bolster the innovation potential of countries and regions by enabling informational, scientific, and instructional support for users of the services of the centers in the sphere of science, R&D, and innovation. Nine such centers operate in Belarus at present: one in the national scientific and technical library, one in each of the library's regional branches, one in the Belarusian State University, another one in the China-Belarus industrial park Great Stone, and another one in the National Center of Intellectual Property. There are plans to open several centers in libraries of the National Academy of Sciences of Belarus.

While in Vitebsk Chairman of the State Science and Technology Committee Aleksandr Shumilin also met with the management of OAO Vityas in order to discuss progress in implementing an innovative project, which provides for creating modern manufacturing facilities and making electric vehicle charging infrastructure components, including Mode 4 fast charging stations.